AMBERLab advances blockchain in the Philippines

AMBERLab is poised to become a venue for research and education of blockchain technologies in the Philippines.

Blockchain is one of the buzzwords that had taken the world by storm. It is often associated with Bitcoin, which is a decentralised digital system that allows people to exchange money without the need to go through intermediaries.

But what is blockchain? It is the technology that makes bitcoin or any cryptocurrency, or any form of electronic cash, viable.

Blockchain is an incorruptible public digital ledger that can be checked or confirmed by anyone through the internet.

This digital ledger organises transactions into data “blocks” which in turn are arranged into a “chain” that links it to other blocks.

The links can be seen by anyone, making it easier to identify, verify and protect transactions.

Several countries around the world are already utilising the technology. However, it is only recently that it has started traction in the Philippines.

A lot of people in the Philippines are, undoubtedly, still unaware of its capabilities and its potential to revolutionise the way things are being done.

Thankfully, there are concerned institutions and organisations that thought of setting up AMBERLab to keep pace with the growing demand.

AMBERLab, which stands for Ateneo-MediXserve Blockchain Education and Research Lab, is poised to become a venue for research and education of blockchain technologies.

Despite being launched less than a year ago, on 08 August 2018, OpenGov Asia has acknowledged its efforts and is conferring the AMBERLab project with a Recognition of Excellence award at its Philippine OpenGov Leadership Forum 2019 on 25 April 2019. 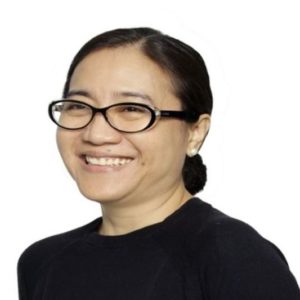 An understanding of the project will require knowledge of its background. To learn more about the project and share its journey, OpenGov Asia spoke with Dr Maria Regina Estuar, Executive Director, AMBERLab.

Several years prior to the birth of the Lab, led by visionaries from Smart Communications, this telecommunications company gave the country its first electronic medical and referral system, a Secured Health Information Network and Exchange under Project SHINE.

The objective was to aid the country in universal health care following the eHealth Framework that was initiated in 2010.

Realising that sustainability for provision of EMRs to the communities is best addressed by transferring the project to Public Affairs, SMART’s donation to Ateneo Java Wireless Competency Centre gave birth to SHINEOS+, an open source version of SHINE.

From 2013 – 2017, the Centre continued to develop and deploy several versions of the system based on the requirements from the Department of Health (DOH) and Philippine Health Insurance Corporation (PHIC).

This project provided exposure to CS and MIS students on the complexities of universal health care and how Computer Science addresses gaps in data capture, transformation and delivery.

Managing operations of health care systems, especially for public health, required expanding partnerships to include other industries whose expertise is in health technologies.

AMBERLab has four areas of focus. These are research, education, incubation and community.

Ateneo is a university and research is part of what it does. The students get to work on real projects. These projects are tied with the current EMR services as well as eHealth innovations based on the needs of the community.

Students are doing researches and simulations in the Lab to address the problems experienced in the real world.

Born in August 2018, the Lab’s objective for its first year is really education.

Education is vital because before anyone can do the blockchain aspect of the project, they should have the necessary skills for it.

In order to see the value of the technology, one must be able to understand the application.

Dr Estuar explained that the new elective had its initial offering in the University during the second semester of SY 2018 – 2019.

Together with the company, AMBER Lab co-produced an extended course so that students will produce blockchain prototypes at the end of the semester.

According to Dr Estuar, “The country needs a new generation of Computer Scientists who understand the fabric of distributed digital ledgers in order for them to develop solutions to assist both government and private sectors in providing better ICT services in relation to health, education, disaster response, and transportation, to name a few.”

Hopefully, once this elective is fine-tuned, it will also be opened to other state colleges and universities (SUCS) in order to extend capacity building to more schools.

This way, the country will be better prepared and well versed as it embraces the technology in the near future.

According to her, “This is not a competition. We need a massive education campaign on blockchain so that more people can create solutions and we will just have to choose which is best.”

By educating people, the students might produce something interesting, through their research, which may have potential for incubation.

Incubation is the Lab’s way of giving back to the University. The R&Ds done can be made real with a little help. Incubating these projects means that they can stay within the institution until they become successful.

As for community, it is the area that wraps everything together. The reason behind why all of these are being done is to give back to the community.

The projects are community-driven in line with the University’s thrust of being men and women for others.

Challenges faced by blockchain in the Philippines

Admittedly, the top challenge being faced by blockchain in the country is infrastructure. The bandwidth, unfortunately, is not par with other countries thereby inhibiting the full utilisation of the technology.

The second challenge would be blockchain knowledge, which is what the Lab is addressing currently.

After the introductory elective, the Lab is looking forward to other electives, which may be more advanced in nature. Shorter programs that do not require a whole semester are also being envisioned.

As a research laboratory, AMBERLab focuses on frontier issues by understanding how blockchain technology can better serve the countrymen.

With most of the solutions geared towards development of platforms to better facilitate public health services, the Lab is designing its EMR on the chain to ensure that data is secure and kept private.

Data provenance is important in health information especially when it is used for electronic insurance claims.

With the expansion of eHealth services towards a more interoperable health information exchange, there is more opportunity for innovation that will serve the Filipino people.

How to measure success?

There are three metrics that AMBERLab banks on when gauging their success.

The Lab would recognise that they have advanced the utilisation of blockchain in the country, firstly, if they have produced enough graduates to address the demand from industry.

The second success metric is the number of projects produced related to blockchain. Having more projects that focus on blockchain would prove that their research is going in the right direction.

Hopefully in two or three years, the Lab will receive one big grant or several small grants to sustain the technology.

Dr Estuar concluded the interview by sharing the most important metric in knowing that their research is effective.

According to her, “Overall, our measure of success is if every ordinary Juan (Filipino) is already affected by the blockchain technology and experiences its outcomes in everyday life.”

It will definitely be a long road ahead for AMBERLab. The work with EMR, alone, took them 8 years and is still a work in progress.

She forecasted that it will probably take 10 years at least for the Philippines to have a stable economy for blockchain.

However, the projects will most likely be streamlined if the government and more organisations realise its potential and offer their support, thereby ensuring a blockchain-secured future for the Filipinos.