Quantum Technology will change the way we look at any of our existing technologies and can open up new horizons on the digital landscape, difficult to currently imagine.

What is Quantum Technology

When asked what the biggest innovation in the technology and innovation landscape is, one might be quick to go with Artificial Intelligence (AI) or 5G technology.

But while these technologies are still upcoming and are advancing with each stage, the latest buzzword in town making waves is Quantum Technology.

A relatively new term being bandied about, it is actually not a new technology. Quantum technology exploits the laws of quantum mechanics, quantum physics and atomic physics.

Most excitingly, Quantum Technology changes the way we look at any of our existing technologies. It will rebuild the way applications are done, the way we communicate and the way we sense and offer new possibilities currently difficult to imagine. 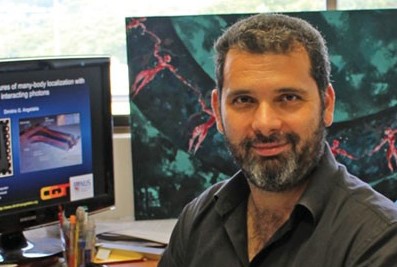 OpenGov sat down with Professor Dimitris G. Angelakis, Principal Investigator at the Centre of Quantum Technologies (CQT), at the National University of Singapore to get a thorough insight on this technology.

Prof Angelakis joined CQT in 2009 from Cambridge University. He did his doctorate in Imperial College London supported by the Greek State Scholarship Foundation.

His Ph.D. work in quantum light-matter interactions received the Valerie Myerscough prize in 2000, and the Institute of Physics UK prize in 2002. He is also a professor on leave from his native country Greece, at the Technical University of Crete

He is known among others for his pioneering work in quantum simulators using light-matter systems. He received the Google Quantum Innovation Prize in 2018.

Prof Angelakis started by explaining that the abacus and classical computing (laptops, desktops supercomputers) are much closer to each other than a classical computer is to a quantum computer.

Quantum computers will also allow AI and machine-learning to progress beyond its current abilities. Prof Angelakis said that AI is successful now because there is enough data to train the machines. However, the computing power to process it is being saturated. Quantum will provide the answer to that.

Having an optimal path at the lowest cost and shortest time is difficult but quantum allows for that.  It can be used in places such as shipping lanes, gate allocation of airplanes, and traffic flow optimisation in cities.

“When it comes to logistics and optimisation, quantum is a killer application for them,” said Prof Angelakis.

Due to the world running out of oil and resources, there is a need to rely on other sources of energy.

Prof Angelakis stressed that it is imperative to optimise where power plants are placed in relation to where the need is. Knowing the location of storage facilities and of renewable sources of energy is important for optimally transporting energy from the production place to the consumption place.

This is a complex process to ensure that the produced energy is not wasted.

Quantum computing comes into play by efficiently reducing the cost of transporting energy. It will aid by consolidating all the information into algorithms for a city, country or even continent and will determine the ideal location for setting up the power plants, storage facilities and renewable plans.

Prof Angelakis stressed that since Singapore is very reliant on external resources, it needs to have optimal management of its resources for its survival.

Studying how a certain drug acts on the body at the molecular level is extremely difficult to simulate with classical computers. It requires a lot of memory and processing power.

Currently, the research is done by conducting several random trials. As simulating how drugs act at the molecular or cellular level is impossible, Prof Angelakis said that tests are conducted on patients or animals where they consume certain dosages of medicine and their responses are observed.

Having a quantum computer will allow the custom designing of drugs using efficient quantum simulations algorithms, with fewer possible side effects and maximum efficiency.

This is a more medium to long term applications with optimisation and chemistry application. Prof Angelakis said that some of them are already happening.

Innovations and Other Aspects of Quantum Technology

Secure quantum cryptography devices are used for transmitting information signals via fibres or satellites. They are so secure that classical computers cannot be used to break them down for finding out the security key. This based on the laws of physics.

Prof Angelakis explained that classical cryptography is based on encoding complicated large security keys in mathematical functions, such as the prime factors of a large number.

These are also known as RSA protocols in cybersecurity where data is encoded in large numbers which are difficult to break down into factors.

Quantum computers can break it down exponentially faster. A quantum computer with hardware of a few thousand qubits can break down security keys in a few minutes which would take decades for the fastest classical supercomputers.

Encoding information in a quantum system can provide absolute security as quantum systems cannot be copied. If someone is trying to hack into a conversation the signal will change, and both the sender and receiver will be notified. The receiver can then correct or delete that message.

CQT has a collaboration with SingTel for a corporate lab that is aimed at making the island more Quantum secure by using fibre network. There is also a satellite quantum cryptograph program where CQT leads an international effort to establish secure communications over large distances mediated by satellites.

Beyond quantum computers function, other applications of quantum technologies include quantum sensors and quantum clocks

Putting it on a mobile device, like a phone, for example, will allow for navigation without GPS and satellites. Prof Angelakis explained that this is possible as quantum gravitometers, for example, can detect very tiny variations of the gravitational field.

Quantum sensors of this type will allow for an individual to locate their specific position within a building.

Quantum technology has attracted the interest of various defence agencies since about 20 to 25 years ago. Numerous agencies such as DARPA, NSA, AFRL, and the UK defence ministry, have funded and supported quantum technology projects in various sectors.

The European Union (EU) has launched an EU level Quantum Flagship Program. In the EU for every 10 years, two or three key areas of technology are picked. Quantum technology is currently one of them.

US has also recently launched a quantum initiative while Singapore has been investing in quantum research for many years, spearheaded by CQT for more than 12 years now.

CQT also has collaborations with DSO National Laboratories on its innovation and research work in the future of quantum technologies.

Prof Angelakis said that Singapore has already been in the quantum technologies race for more than a decade.  In quantum computing and simulations, there is a lot of development of quantum software and algorithms. There is also a growing interest from data analytics companies, medicine and finance sectors.

Singapore has also created various quantum-enabled devices, such as quantum clocks and quantum sensors with advanced capabilities, and is leading the in the quantum communication area

Prof Angelakis added that is still difficult to predict the future of the adoption rate of this technology as it is a very disruptive technology.

The View on Quantum Technology

While Quantum technology seems to provide many promising solutions and revolutionise the way technology is looked at, it is important to make a reality check on it.

“People must be careful in separating hype from reality. Care must be taken when talking of what is possible and what’s not,” said Prof Angelakis.

He added that making big promises, or predictions of such disruptive technology beyond 3 to 5 years is pointless.  He said that in the same way that someone in the 60s could not predict the invention of our era such as the smartphone, more cautious assessments should be made for quantum technology.

One thing is for sure, quantum will change the world and the way we think about it.