Singapore was ranked 6 out of 16 countries as an Innovation Champion, according to the Consumer Electronics Show.

According to the annual Consumer Electronics Show, CES, Singapore was among 16 countries recognised as a ‘2019 Innovation Champion’.

During the second edition of the International Innovation Scorecard developed by the Consumer Technology Association (CTA) and presented during the CTA’s State of the Industry Address at the CES, 16 countries were identified as innovation champions.

Out of 61 countries, the CTA’s International Innovation Scorecard listed Estonia, Switzerland and Finland as having the highest composite scores. Singapore came in fifth, just after the United States. The other 12 countries were Australia, Canada, Denmark, Germany, Israel, Luxembourg, the Netherlands, New Zealand, Norway, Sweden and the United Kingdom.

The CTS assessed the countries across 28 indicators to determine whether they stifle progress or work to fuel innovation and improving lives.

The CTA rates each country on the Scorecard ranks in one of four tiers: Innovation Champions excel in almost all areas, followed by Innovation Leaders, which earn high scores in most. Behind the Leaders are Innovation Adopters, which promote innovation in some areas but not others. Finally, Modest Innovators may support innovation in one or more areas, but they show the greatest room for improvement.

The International Innovation Scorecard considers a range of indicators, including whether or not publicly available, verifiable and independent third-party data exists; if comparable data across nations exists; and if governments can influence public policy.

According to its scorecard, Singapore scored highly for being open to innovation and was the first country to test self-driving taxis. It noted that over 50% of the workforce is highly skilled and almost half of all college degrees granted are in science, technology, engineering and mathematics (STEM) fields.

The report stated that the city-state passed clear guidelines for ride-sharing operators, which helped to improve its ride-sharing grade from C to B.

Another area where Singapore ranked well was its monthly fixed broadband cost – 0.5% of gross national income (GNI) per capita that is notably lower than countries like Australia at 1.1 % and New Zealand at 1.8%.

The country also has a high new business entry rate of over eight per 1,000 people, and one of the lowest corporate tax rates of any country (only 17%). Streaming services are also not subject to tax.

The CTA noted Singapore’s mean download speed for fixed and mobile data was 60.4 megabytes per second (Mbps). This is also considerably higher than that in Australia (11.7 Mbps) and New Zealand (23.8 Mbps). 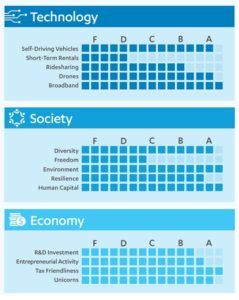 It also topped the diversity scorecard, with immigrants making up a large chunk of the country’s population (46%) and an above-average level of gender parity among workers that fall between the ages of 25 to 54.

Singapore also stands out for its notably welcoming approach toward drones. In 2018, the country’s Transport Ministry, Civil Aviation Authority and the real estate company JTC Corporation announced plans for a new drone research initiative. The centre will house five projects involving drones, ranging from delivery to search and rescue and emergency response applications

Although Singapore did well, the report said there are areas the country could do better in. It suggested that Singapore can improve its levels of both personal and political freedom. Also, it could lift its three-month threshold for private rentals and ease strict fines imposed on short-term rental hosts.

Singapore scored A for 10 out of 14 categories measured.

India’s initiative for cyber crimes against women and children

How the government is improving Australia’s telco networks